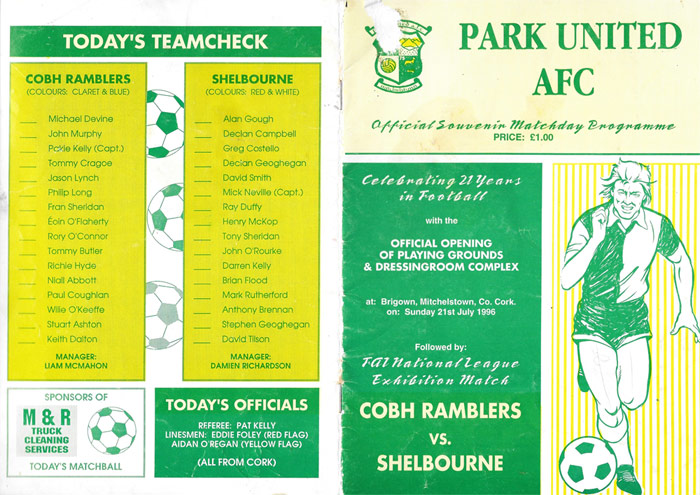 In 1975, Park United was formed in Mitchelstown by a group of local people after years of playing street leagues in the town. The name was chosen as an acknowledgement of Liam Lynch Park, where many of the club founders hailed from and close to where those street leagues were played. The club entered the Cork AUL in 1975 and initially played its home games on a site, donated by Mitchelstown Creameries, on the Limerick Road where the Aldi distribution centre is now located. Founding members of the club included George Donegan, Pa Cotter, Michael Brazil, Tom O’Gorman, Michael Aherne, Michael Walsh, Tom O’Keeffe, Larry Coleman, Billy Cahill, Dick Cahill and Billy Murphy.

Park United played its first game against Bride View Rovers in Tallow on 15 August 1975. On a wet and windy day, the well supported Park team earned a hard fought 3-3 draw with goals from Billy Crowley, Denis Murphy and Timmy Crowley.

It was only 4 years before the club reached its first final, the Murphy Cup in 1979, and another 4 years before it got its first taste of success, winning League 2A of the Cork AUL in 1983. The clubs first cup success came in the Presidents Cup in 1988.

A schoolboys section was formed in the early 1990s and since then the club has gone from strength to strength and has had remarkable success on the field of play, regularly winning leagues and cups at adult, schoolboy and schoolgirl level. This culminated in the club winning the Cork AUL Premier League and AOH Cup double in 2015/16, leading to a move from Junior to Senior football for its Adult Men’s teams in 2017. The club made an immediate impact in the Munster Senior League winning Senior Division 2 in its first season at senior level.

At adult male level, Park United currently has a Senior team and a Junior team playing in the Munster Senior League. It fields teams in the Cork Schoolboys League from U11 to U16 with at least 1 team in each age group and a team at U18 level in the Cork Youth Leagues. The girls’ section of the club has been rejuvenated in recent years and currently fields 3 underage teams in the Cork Womens & Schoolgirls Soccer Leagues.

Park United is built on solid foundations, not only in terms of its grounds and facilities, but also in terms of its players and management structure. The club embraces the concept that soccer at an early age is about honing kids’ individual skills and fostering a love for the game. The club places great emphasis on participation and on developing young players. It is particularly proud of its Academy which was formed in 1999 and now has approximately 100 boys and girls, from the ages of 5 to 10 years old, involved every weekend during the primary school term (September to June).

A real measure of the club’s success is that the majority of players in its successful adult teams have come through the Academy and underage structures.

There has also been significant success off the field of play with the club’s dream of owning its own pitch being realised in 1985 when 3.5 acres of land were purchased in Brigown for £15,000. The club invested heavily to level, drain and re-seed what is now 2 full size grass pitches and to build a boundary wall.

In 1996 the club again made a large investment to build a fine clubhouse with dressing rooms, meeting room, stores, shower block and toilet facilities. Development of the facilities continued when, in 2008, a 40m x 40m AstroTurf training facility with floodlights was opened.

It is estimated that in excess of €500,000 has been spent to date on developing the facility at Brigown Park and the club’s facilities now include 3 grass pitches, the all-weather floodlit training pitch as well as a clubhouse with dressing rooms, showers and meeting room.